Zipp Mobility has eyes on getting UCD students moving around campus 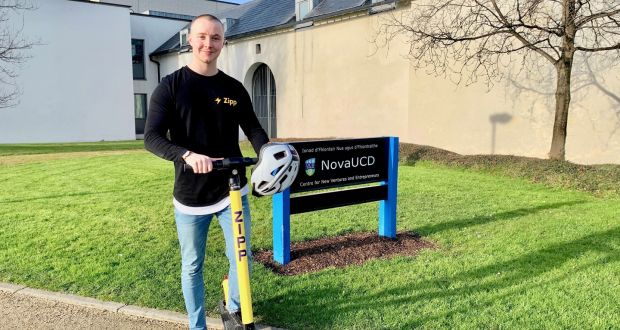 While e-scooters are fast becoming part of the mobility landscape in many cities, the meteoric rise of rental scooters as a fast, cheap way to get around hasn’t been without its problems. Pedestrians don’t like sharing their space, broken scooters are being abandoned by the roadside and the high cost of using gig-economy workers has seen start-ups in the sector burning through cash. But Zipp Mobility founder Charlie Gleeson is undeterred. He says he has learned from others’ mistakes and is taking a different approach.

Gleeson set up Zipp last June and its first scooters will go into service in April, more than likely within the geofenced area of the 330-acre University College Dublin campus with other campuses to follow. He has chosen this route to market because of unresolved legislative issues. Legislation to regulate e-scooters is coming, but currently it’s not possible to get a fleet license for public roads. Gleeson is hoping that because he will have already launched and scaled within multiple campus settings, local authorities will look favourably on his application for public road licenses when the time comes.

The number of scooters per campus will depend on potential user volume and users will pay 75 cent to unlock a scooter and 20 cent a minute to use it. Third-party insurance is included in the rental cost. “Our service involves three easy steps,” Gleeson says. “Download the Zipp app. Locate your nearest scooter using the GPS locator. Scan the code to initiate the electrics then ride to your destination.” As with bike rental, there will be multiple pick-up and drop-off points.

GPS tracking
One of the most obvious differences between a Zipp scooter and others already in use is its size. It is a heavy-duty, non-foldable scooter built for B2B use and comes with in-built GPS tracking to deter thieves. If someone tries to take a Zipp scooter off campus it emits a warning beep before shutting down.

Gleeson chose commercial grade scooters because one of the problems the early start-ups faced was a high rate of hardware attrition: lightweight scooters simply fell apart after a couple of weeks. Zipp scooters have a battery life of 10 years and a range of 50km. When it comes to charging, Gleeson has also gone a different route opting for swappable batteries that can be changed at the kerbside. This removes the need to have people collecting scooters 24/7, bringing them in for charging and returning them to the pick-up points.

“We will employ full-time staff which will increase our gross profit margin while avoiding potential ethical issues associated with gig-economy employment,” he says.

Gleeson was inspired to create Zipp because he was frustrated trying to get around Irish cities. “I had seen the success of e-scooter rental elsewhere and thought this kind of service would be perfect to increase accessibility to Ireland’s public transport links,” he says.

“We’re addressing two main travel-related issues: congestion and carbon emissions. Both are caused by the so-called ‘last-mile problem’. Bike rental only solves one part of a two-part problem because it’s limited to the city centre and doesn’t address last-mile transportation in suburban areas. Zipp Mobility does.”

Gleeson is a graduate of the Lochlann Quinn School of Business at UCD. He has participated in the college’s programme for student entrepreneurs and most recently in the VentureLaunch accelerator at NovaUCD. Investment in the business, which now employs three people with five more jobs to come this year, has been €50,000 from Enterprise Ireland’s Competitive Start Fund. Zipp is now in the process of initiating a seed round of €500,000.

This site uses cookies. By continuing to browse the site, you are agreeing to our use of cookies.

We may request cookies to be set on your device. We use cookies to let us know when you visit our websites, how you interact with us, to enrich your user experience, and to customize your relationship with our website.

Click on the different category headings to find out more. You can also change some of your preferences. Note that blocking some types of cookies may impact your experience on our websites and the services we are able to offer.

These cookies are strictly necessary to provide you with services available through our website and to use some of its features.

Because these cookies are strictly necessary to deliver the website, you cannot refuse them without impacting how our site functions. You can block or delete them by changing your browser settings and force blocking all cookies on this website.

We also use different external services like Google Webfonts, Google Maps and external Video providers. Since these providers may collect personal data like your IP address we allow you to block them here. Please be aware that this might heavily reduce the functionality and appearance of our site. Changes will take effect once you reload the page.